Daughters donate parts of liver to save father’s life.

Posted on June 21, 2019 by Sandarbh A Sharma Leave a comment 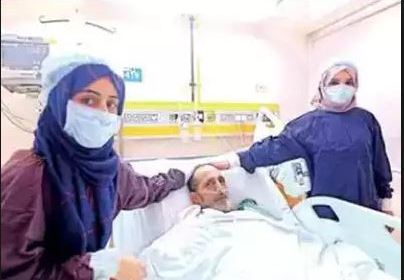 Based on inputs by Meeta K

The doctors at Apollo hospital, Delhi, did liver transplant using 2 halves of liver donated by daughters of Al Naqeeb, a Yemeni national suffering from end-stage liver disease. The decision to use parts of 2 daughters was taken as both daughters, who are in their 20s, had less than the required volume of liver. In a typical adult recipient, 55% to 70% of the liver (the right lobe) is removed from a healthy living donor. The donor’s liver regenerates approaching 100% function within four to six weeks.

“Dual lobe liver transplant is possible, but it is more complex. Because we didn’t have any other option to save the patient’s life, we give it a chance and succeeded,” said Dr Goyal, senior consultant liver transplant at the hospital. The doctor told that they took out the right lobe of the Bahaja’s liver, weighing 400 grams, and the left lobe of Sarah’s liver that weighed 240 gm, and implanted both in the recipient.

“There was a lot of pressure on our team as two donors were involved in the process. The patient’s transplant was already a high-risk one due to his multiple problems. But we succeeded in giving the patient a new lease of life,” Dr Goyal said.

The transplant was carried on May 23, and the doctor said that Naqeeb is fit enough to be discharged from hospital now. “Bahaja and Sarah are doing well too,” he added.

Dual lobe liver transplants are rare because they are complex. In a single donor transplant, the venous channel in only side of the liver has to be connected in the recipient. But a dual lobe transplant, venous channels of both the right lobe and the left lobe have to be joined, the doctor explaine